So have you seen Knock-Off Wood, the site by blogger extraordinaire Ana White? This woman is incredible! Since October, she's posted nearly 200 plans to help people build real furniture on a real budget. This woman is going places, I tell ya.

I first discovered her site a few months ago and while I drooled over lots of her plans, it was her plans for the the ultra-cheap raised cedar beds that had me begging Other Half for a lesson in how to use his chop saw. I had lots of help from him in putting our garden beds together (two at 6' x 2' and one at 6' x 1'), but I can say that I cut every board, drove every screw and hammered in every nail. Other Half was so proud, he even took a pic as I finished: 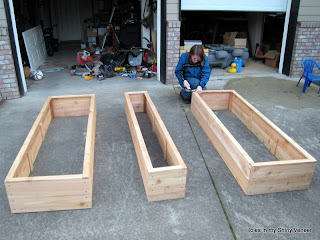 Close-up of my hammer work: 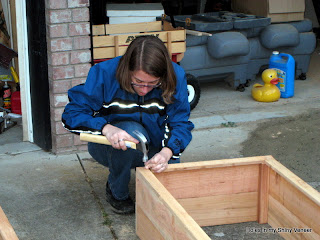 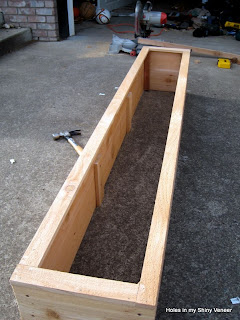 And here they are installed along the veggie garden fence. The first bed is only 1 foot deep so that I can maneuver the wheelbarrow and such in through the gate (where I'm standing.) 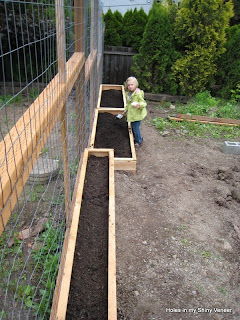 And those first 3 were so fun that we built two more, a bit different from the first set. The first set was out of cedar fence pickets (only $1.59 each), but we built these 6' x 4' ones out of 5/4" cedar planking. And yes, they're upside down in this photo! I had stapled on the weed barrier, but they're waiting for their base layer to be prepped there to the left of the cinder block beds (which were much more expensive and time-consuming to build, by the way) 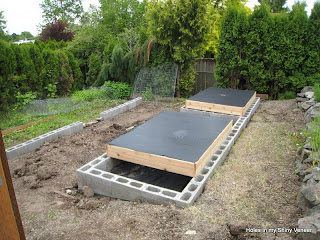 I'll take you on a tour of the veggie garden one of these days-- the compost is waiting to be put in all of those beds...
by Diana (Ladybug Limited)

What Do I Write About?